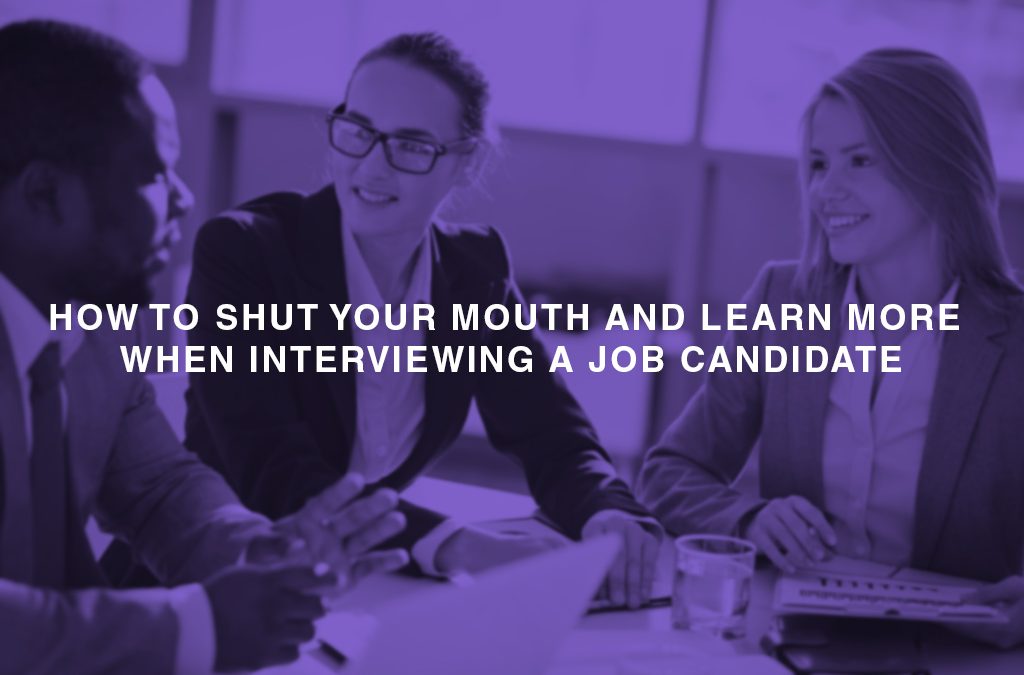 Shut your mouth and learn more when interviewing a candidate.

A mentor once told me God gave you two ears and only one mouth for a reason. If so, why do most hiring managers talk twice as much as they listen in an interview?

Interviewers often begin talking the minute they sit down with a job candidate. What they should be doing is asking questions.  Lack of preparedness and nerves are what cause most interviewers to talk more than they listen. Prepared interviewers, who come with a list of questions, are much better at listening and achieve far better results. After sitting in on thousands of interviews over the last two decades it is painfully clear to me, hardly any interviewers come prepared to ask questions; most simply wing it!

If your interview style can be characterized as ‘winging it,’ what can you do? Start by having the interviewer take you through his or her resume before you talk about the company or the job.  After your greetings, the first step is to ask the interviewee to walk you through his resume from the beginning, briefly describing what he/she did at each job, and the reason(s) why he left each job.

The goal is to hand the speaking burden to the interviewee almost immediately.  Instead of starting the interview by talking about the company or the position, start with an invitation for the interviewee to go through his resume.  I personally like to start from the beginning of their career and describe their work history from the oldest to most recent job.

The advantage goes to the interviewer when the obligation to speak first is on the job candidate.  This gives the interviewer time to read through the resume in detail as the candidate speaks. This is especially helpful for those of us who only skim through resumes.  By asking the interviewee to “briefly tell you about each job, and the reasons for leaving each job.” the interviewer gets to hear how articulate and succinct the person is and understands if he left jobs for good reasons or not. If the individual can’t succinctly bring you through his or her own resume in less than five minutes you may have the wrong person for the job. If the person has poor reasons for leaving jobs, or goes off on tangents, you can save yourself time by cutting the interview short.

Most importantly, by having the job candidate speak about his skills before you describe what you are looking for, you will get a clearer and less biased understanding of the person’s background and match for your job, because they won’t be trying to tell you what they think you want to hear.

Remember he who speaks first and most often loses the advantage in an interview.